Towards Socialism & on the dangers of Occupy, 99% and "Entryism"

The Occupy movement accomplished one tremendous thing; it put the issue of inequality back into daily political discourse, and this was a remarkably important accomplishment to which all on the left owe its activists a debt of gratitude.

However, as a way to start a real discussion as to its methods, tactics and primary slogan, I begin by reposting this (name deleted) from the "Occupy Toronto" wall on Facebook.

"Who's in charge of the donations? $40,000 ..this budget is enough to have real demonstrations and banner drops against back to work legislation and protect the wheat board and tuition freeze ... "

To me this is an important discussion about the limitations of so-called "direct democracy". As hard as it may be to believe, things like voting, "Robert's Rules" and constitutions were created to PROTECT the powerless and less powerful against those with wealth and power, as well as those who would assume power. They exist as a barrier against the social power of the wealthy as well as those who would seek to rule by decree, and that is why the radical right is doing whatever it can to destroy these protections.

So, who are "we"? Who is in charge of donations to the "Occupy" movement and who has oversight over their decisions? Who opens the credit union accounts and decides what the money should be spent on? Who is accountable if these funds are not used appropriately, and what governing body decides what is appropriate? What rules govern the discussions and dictate when people are being out-of-order or working in counter-productive ways? Who, now that the movement has been shut down has control over that money, which was in the tens-of-thousands, and who dictates its distribution? Was this not money of working people donated through the OFL? So where exactly is it now and who has control over the bank accounts? What are their names? Where did it go after the end of the "Occupation"? Was it given back?

Without rules or constitutions do you really trust millions of people, if we were to win, to not make decisions that are arbitrary or dangerous? Or is it a non-issue because "democracy" will only be extended to the "enlightened"?

Rules and law protect regular and innocent people. They are safeguards against arbitrary actions by corporations, governments or self-appointed vanguards and we should not get rid of them. Our forebears on the left died to create the context in which we now work and joining the right in trying to rip it down will help no one.

There are three obvious things wrong with so-called "direct" democracy:

1) It is not direct at all. Voting is direct. Open discussion around motions is direct. Actually coming to a resolution as a group is direct. Nebulous personality conflicts and discussions around immediate day-to-day aims or factional disagreements is not direct.

2) In a "direct" democracy who actually decides? When you have a collective vote, an idea that millions of women and men on the left have and continue to fight and die for, everyone plays a part. Should there be more of them and in more areas of life? Yes. But with no votes decisions will end up being made by a very small group of the same handful of individuals over-and-over again. Voting has faith in and empowers everyone, "consensus" disempowers everyone other than a central few figures willing and able to commit to dominating the group. It is charismatic despotism.

3) Rules are not bourgeois. They are not capitalist. Safeguards, constitutions, rules-of-order, voting, rights, formats, were all created to AID the working class and the people not to hinder them. Prior to their existence power, violence, despotism, were the norm. Feudalism and slave based misogynist "Republics" were all based on the "direct" model. The "direct" power of the boot to your face if you were not part of the ruling clique.

Rules, constitutions, voting and democratic norms are all that the Left and civil society has. Discard them at your own peril.

But, beyond that, the Occupy slogans are based on false and bourgeois premises.

The basic problem with the 99% slogan is that it is false. The idea that you can distill the complexities of modern global capitalism and class conflict down to the notion that all the courts, laws, governments, bureaucracy, etc all function with the exclusive purpose of doing the bidding of 1% of the population over the interests of the other 99% of the population is not merely reductionist, it is absurd. It is also dangerously conspiratorial in its world view.

While it may be effective as a slogan, it is profoundly ineffective as an ideological vision or a social analysis and the negative aspects of its use outweigh by a large margin any benefits.

On the most basic level it is wrong because it asserts that what is left of the traditional working-class, the white collar lower middle class and the new retail working class, among others, share essentially common interests with parts of the middle managerial class, less successful or lower level entrepreneurs, many, if not most, professionals, police officers, academics, small business owners, many stock brokers, bank branch managers or loan officers, etc, who are all a part of the "99%".

In fact, the simplistic message of this idea has far more in common as an ideological perspective with crank theories about "Bilderbergers" and plots to create "One World Government" than it does with traditional socialism and Marxism. It presents our society as if it is akin to the Russia of Ivan the Terrible in the nature of its power structures; a notion that is at best simple-minded. This in large part explains why Occupy was more about the airing of grievances than it was about the attaining of solutions. What solution to such a world view is possible? There are only two. Either you capitulate to liberalism and try to wrest "concessions" of some type or another from the "1%" or you seek for a rapture in revolution whereby you remove the "1%" in some way-or-another (though one would have to think that, if you actually believe our society is constructed this way that this would have to be through enormous violence...if 1% of the population has society in thrall to it they will not give up without a hell of a fight) and then presumably everything will be better.

Given that Occupy refuses rules, constitutions or votes of anykind one can only suppose that this result would be more akin to the Khmer Rouge than it would to the New Jerusalem.

Ultimately it is something of a moot point as the very tactics of false consensus, the "human mic" and the notion of "Occupying" a specific space doom it to failure from the start. For one thing it certainly makes it easier for the authorities to find exactly who they need to when the crackdown comes. And once it has, what then?

And then the futility of "entryism"

Entrysim, originally, was an idea that one would, for a short period, infiltrate "mainstream" left-wing parties so as to agitate for the creation of a more radical political formation. The intent was, in fact, to be expelled. The hope was that this would draw others out with you.

While some, correctly perhaps, have questioned the basic morality of this entryist concept, it, at least, had some connection to reality. It accepted the obvious fact that the parties in our system were not actually revolutionary nor were they radical. The entryists never hid their goals nor did they subsume themselves in the rhetoric of the right Social Democrats they opposed.

The "entryists" in Canada of are a somewhat different breed.

They, and there are several variations and factions of them, now make the mainstream social democratic party, in this case the NDP, their permanent home.

Because they perceive themselves to be sharks in a small pond of leftist minnows they accept, for years-and-years, that they will actively advocate for what are pathetic and Neo-Liberal platforms in the entirely delusional idea that this will aid their ultimate objectives.

They do this to avoid expulsion, of course, as if they actually were to advocate for their ideas in any meaningful sense the NDP would, in fact, expel them. (And they have invalidated everyone of their victories...and they will continue to do so).

These entryists lack the stomach for a real fight.

Instead they campaign for, canvass for, applaud and seek to ideologically justify programmes that, election after election become more and more right wing.

To a very large degree they justify their existence through the refracted glory of having been involved in outright "Third Way" campaigns and they claim "success" when these campaigns "succeed".

But it is a very hollow "success".

The Entryists have aided this by making the most Faustian of bargains: claiming to represent a truly Socialist viewpoint while actually running on the opposite; being unwilling to truly criticize farcially liberal campaign platforms and then having the nerve to claim a moral high ground on these same platforms that are no challenge to the neo-liberal order and that embrace its very underpinnings.

They, by accepting that this is the framework, have lent it their moral and political endorsement. And the inane idea that one has to be in the "mass party of labour" both misrepresents the actual NDP and is pseudo-vanguardist.

In the end these Entryist "Leftists", like the Now Magazine or Labour Council types, are basically unwilling to admit, as they all know, that the NDP platform, on any level, is a sad joke, in so far as it even exists. And yet they remain its most stalwart defenders by their absurd and exaggerated rhetoric in defence of a party that long abandoned what they have fought for and they show themselves up by trying to actively fight against real alternatives that actually advocate for what they claim they represent.
Posted by Michael Laxer at 7:53 PM 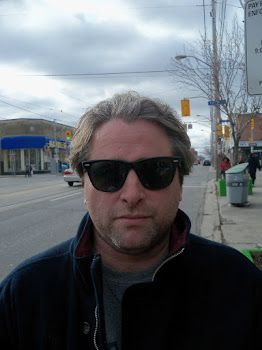